Last week, I talked about how the QML/JS language support plugin for KDevelop started to support basic code-completion. It was able to understand QML import statements and to display the list of all the properties and methods accessible from within a QML component instance.

The first thing that has to work is the proper recognition of object members in the use builder (the use builder is the part of the plugin that tells KDevelop where each variable, function or class is used; this way, KDevelop can highlight every occurence of a variable if you put your cursor on it). This was easier than expected, and the QML/JS plugin was soon able to recognize that "field" in object.field is an use of the "field" attribute of "object". 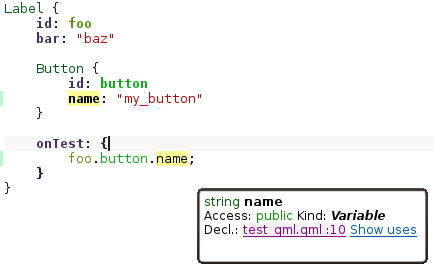 Adding this support to the Javascript language needed a small additional step: "objects" in Javascript are declared like dictionaries in Python (they can also be declared using prototypes or simple assignations, but this is not yet supported). I therefore had to add support for object literals. Once this was in place, the uses were properly recognized:

Finding the uses of object members is cool but is only the first step towards usefulness. As I said in the intro, what most developers want is to have code-completion items for the object they have just typed. The details of this support are a bit complex, but the general idea is to detect that the user has typed object., to remove the last dot, and then to parse the object string (that can be a complex expression, for instance func()[0].prototype. Once this string is parsed, the use builder presented above can be used to find what is the declaration corresponding to the whole expression, and if it is an object, which fields are accessible from it. 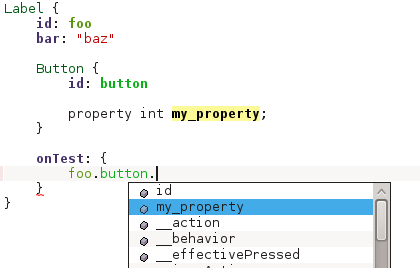 The Javascript support for this was trivial (in fact, the interesting part of the code that I've shown above is in Javascript), but I added one small feature: sometimes, object members are not accessed using object.member, but object["member"]. The QML/JS plugin is therefore able to recognize the latter syntax in addition to the former one, but only when the array subscript is a string literal (it's impossible to guess that object[foo()] will represent a particular member of object, because foo can return anything). 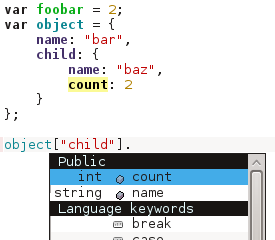 This ends this blog post. I hope you enjoyed the screenshots and the new features! It's very cool to work on all this, and KDevelop is surprisingly powerful. A lot of features appear "for free" (like renaming a variable and having a tooltip that asks me if I want all of its uses to be updated), and the features that must be implemented are easy to implement because KDevelop provides everything one can dream of. Moreover, there a now many language plugins for KDevelop (have a look at kdev-python, kdev-ruby and kdev-php, that work very well, and kdev-clang that is very promising). Having such an amount of plugins eases everything because I can look at them and discover how they have handled a particular problem.

For the curious, here is a list of future features that I plan to implement during the following weeks: