Here is a new status report of my work on the KDevelop QML/JS language support plugin. This week, I have fixed several small bugs and implemented two features: support for function prototypes (a Javascript-only feature), and support for directory imports in QML.

I think that this was the feature the most difficult to implement of all the GSoC project. Moreover, support for function prototypes and Javascript object is not yet complete, and I doubt that the plugin will be able to support the whole Javascript prototype-oriented programming. The reason is that Javascript is a very dynamic language while KDevelop is very static. I'll show you examples of code snippets that would require, in fact, a complete Javascript interpreter and type tracer for them to be correctly handled in KDevelop.

Currently, the feature starts to be usable but is still minimal, mainly because my knowledge of Javascript prototypes is also minimal. I've implement only what I've understood and what was possible without adding thousands of lines of code to the QML/JS plugin. The goal of my GSoC is to have the best QML support possible, with decent Javascript support. 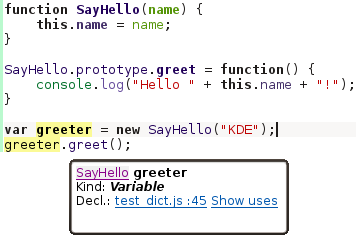 This second screenshot shows how a function can be instantiated (instantiating a function? Javascript is very weird sometimes...). A variable named "greeter" is created, and its type is set to a StructureType. A StructureType represents a class instance in KDevelop, and can be used here to say that "greeter" is an instance of "SayHello".

Now that "greeter" knows that it is an instance of "SayHello", and because I've added a bit of magick in how functions are handled when they are instantiated, the content of the prototype of "SayHello" becomes visible in greeter:

This works fairly well and already allows complex libraries like impress.js to be somewhat usable, but there are still plenty of features missing, some of them being tightly bound to the dynamic nature of Javascript. For instance, "class inheritance" (or emulating it) is very complex and requires assigning a value to the prototype of a function. This could be supported, but ClassA.prototype = ClassB is not the recommended way of doing inheritance in Javascript. I've seen an example looking like this: ClassA.prototype = Object.createObject(ClassB.prototype);. The call to createObject hides the type of ClassB from the type deduction system of the plugin and greatly complexifies things.

Even more advanced constructs, like assigning a function to the constructor property of an object, or playing with its __proto__ attribute, is nearly impossible to handle properly. I don't know if these kinds of constructs are widely used, but one single use at the base of a well-known Javascript framework can make the QML/JS plugin useless for the whole framework.

The last point is that the QML/JS plugin makes no distinction between the prototype of a function and the objects intantiated from it:

Solving this would be a bit complicated, and I think that such a behavior may even be desirable: imagine that QML/JS has missed the declaration of a member of "MyClass", because it was hidden in a function, used an unsupported construct, or anything else. The first time the user (or the library!) will try to use this missing member, it will be declared on the fly. This way, the user may even not notice that the real declaration of the member has been missed.

Back to the nice world of staticly-typed and C++-ish QML :-). QML-related features are less challenging to implement, but QML is a very rich language that has many constructs that need to be handled. One example is QML imports, which exist in four flavors! 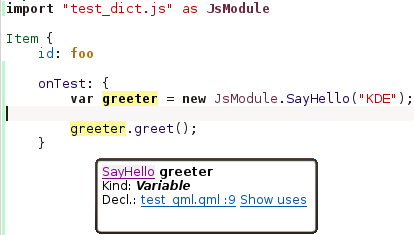 Importing directories is also possible, but I did not have any interesting directory that deserved a screenshot. As always, every feature is unit-tested, and you can see the directory import feature at work in its unit test.