I've not blogged for nearly a month, but it does not mean that nothing has happened. I'm quite busy with university stuff (more on that later), but here are three things that may interest you.

Dolphin has supported Baloo for a very long time and is able to display semantic places like "Today" and "This month" in the right-hand box that lists your preferred folders and your drives. It also allows you to perform simple queries that consist in looking for files containing specific words. 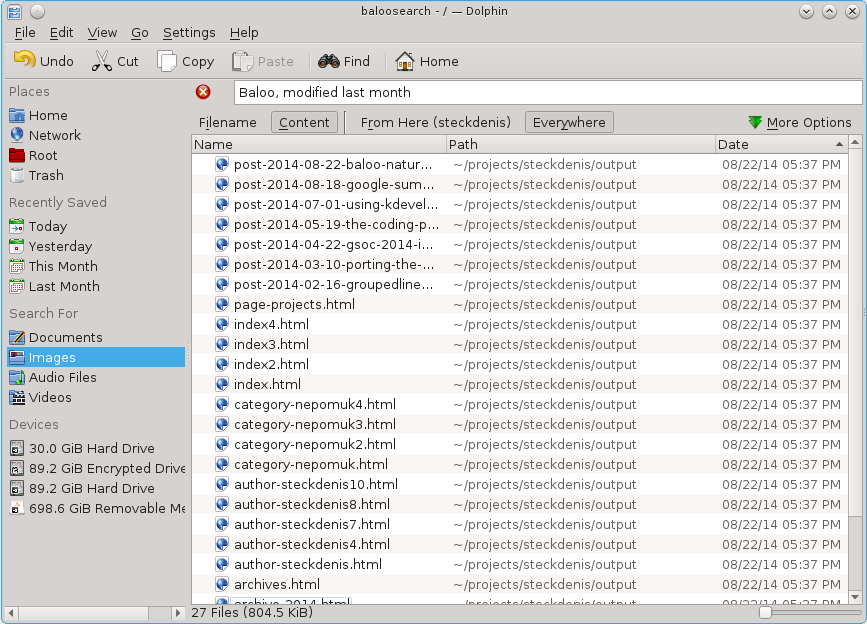 Note that we are in September 2014 and all the results are from August 2014. There is not result before or after August 2014.

Some bug fixes were needed for Baloo to work properly with Dolphin, and they have been pushed upstream (in the now KF5-based master branches of kde:baloo and kde:baloo-widgets). The patch to Dolphin that makes it use the query builder widget has been pushed to the frameworks branch of kde:kde-baseapps.

This feature has been talked about in Randa, but it took time for it to be implemented. The reason is that api.kde.org is a static website, and adding comments to it is not as simple as submitting a patch to a PHP or Python project. api.kde.org needs to talk to a remote service in Javascript, and the comments must be persisted somewhere.

In order not to depend on any proprietary service, the KDE sysadmins decided to avoid Disqus (an online commenting service that offers a Javascript API so that static websites, like my blog, can still have comments on them). Choosing an alternative took a bit of time because they are numerous yet of varying quality. Finally, Juvia has been chosen.

The KDE sysadmins installed Juvia (implemented in Ruby) and set up a database. I also opened an Akismet account for the comments (Akismet is an automatic spam filtering service). Last but not least, the api-comments mailing-list has been created, and I invite the maintainers of Frameworks appearing on api.kde.org to subscribe to this list so that they are kept informed of the comments.

The comments are not yet on-line (I'm waiting for a final "ship it" for my review request), but will hopefully be soon. Working on this gave me the chance to work with the sysadmins, and they are very friendly and very competent people! Hats off to them! 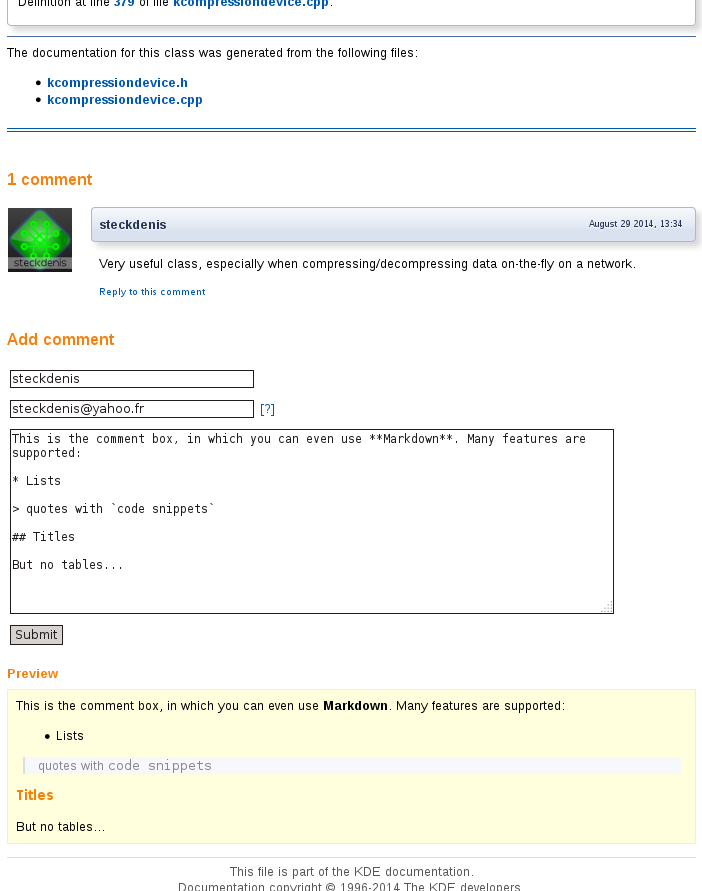 QML/Javascript for KDevelop 4 about to be released

One last thing that I've done at the beginning of September is preparing kdev-qmljs for a release. This is not yet an official release because KDevelop 4.7 (and KDevPlatform 1.7, on which kdev-qmljs depends on) has not yet been released. Once this is done, I'll ask packagers to test my release tarball, because it is the first one that I make and I don't know if everything is correct. By the way, if you have an installed KDevelop 4.7 from Git, don't hesitate to test my tarball (check that it compiles, installs and that the unit tests pass once it has been installed).

Now, some words about the future. In Belgium, the university starts on September 15, next Monday. This means that I will have to attend the lectures and to work for the university. Moreover, I'm entering my fourth year, the first year of Masters. At the end of my fifth year, I will have to present a thesis (also named memoir, but I don't know which word is the most correct or clear).

This is a bit more personal, but I'm preparing my thesis for several years now. I worked on pattern recognition in human writing more than two years ago and finally implemented the Baloo query parser as a pattern matcher. I've also written a paper about my experiments on very fast memory-mapped persistent data stores.

Why am I thinking about that for so long? Usually, students start to wonder on which subject they could write their thesis at the end of the fourth year, not at the very beginning of their university studies. The reason is that my subject, using pattern recognition as I did for the Baloo query parser but for all the human senses (recognizing musics, speech, objects in images, understanding sentences, etc) is very risky. I don't know if what worked for Baloo will be applicable to all the human senses, so two outcomes are possible:

If the subject collapses at one time, I would prefer it to do so as early as possible so that I can work on something else and still get my degree. This is the reason why I've been working on it for so long. I need to be sure that I will end up with something working and interesting before committing to this subject. But things are pretty encouraging so far :-) .